It was nice to be away from weddings and events this weekend, to put aside the stress of relocating, and to get back to doing what I do best… shooting and eating. This shot, ‘Life from Above,’ is my favorite from Saturday’s trip to Daegu’s Seomun Market. PIK Magazine asked me to write up the story behind the shot. 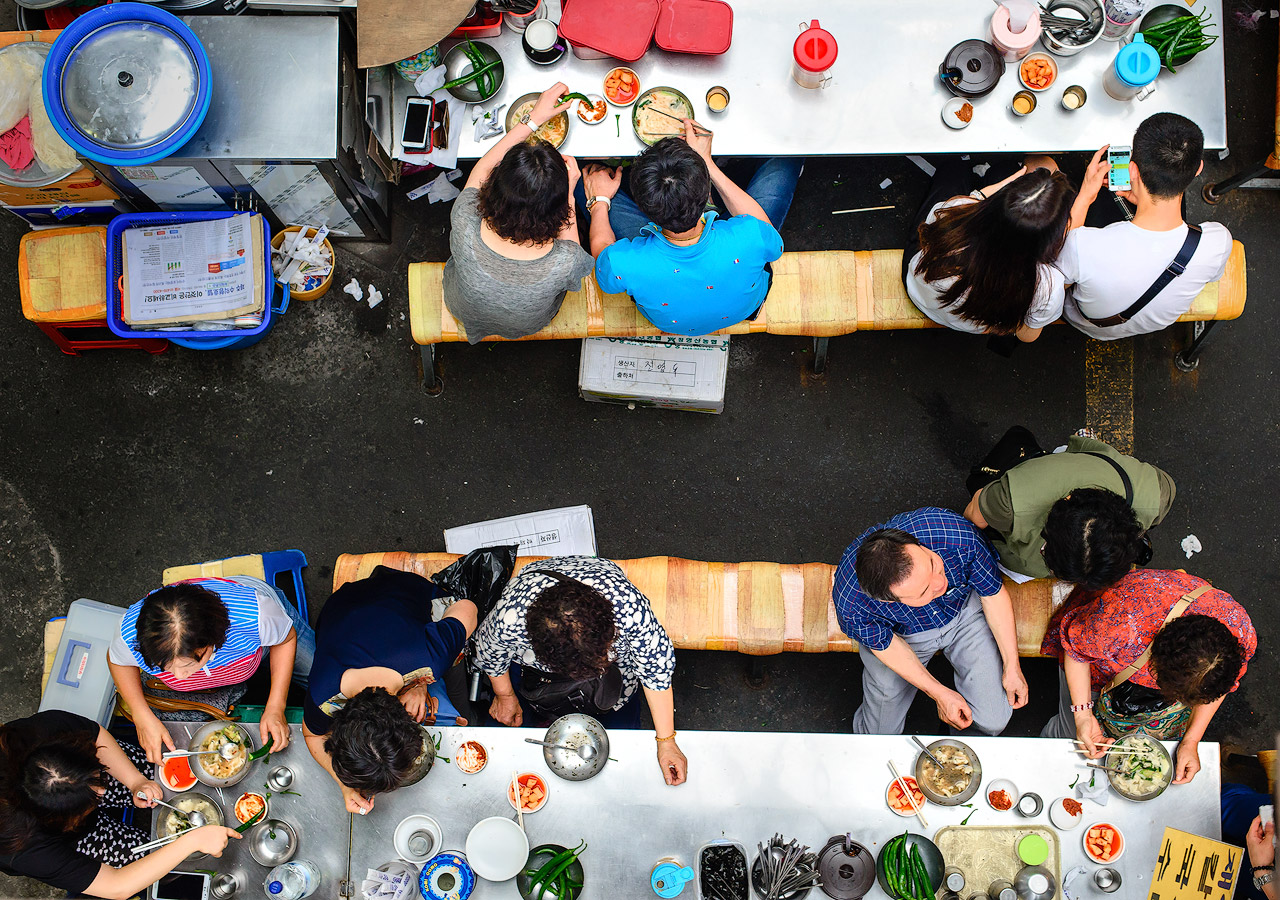 IN MY YOUNGER YEARS, long before I found myself behind the camera, I would flick through photography magazines to pass the time on long train rides. I’d always considered myself more of a writer than a photographer, yet was mesmerized by what the masters could achieve in just a single image. I recall coming across “Me and My Human,” by Vincent Laforet. It’s an aerial shot of skaters dwarfed by their shadows on a New York ice rink. Shot straight from above, I’d seen nothing like it. It’s one of the images that inspired me to start taking photographs in the first place, and so I suppose the seeds were sewn early:  I’d want to try aerial photography sooner or later.

My search for interesting perspectives has led me to scale Korea’s tallest peaks, to shoot dynamic rooftop city scenes, and even to shoot what’s directly above me, but a chance to shoot from above and capture people living their ordinary lives was always something that had evaded me. That was until I discovered Daegu’s Seomun Market.

The key to the look you see here is getting as near as possible to being directly above your subject. The professionals use helicopters, but as a hagwon teacher I find that’s a little out of my budget, and I’m not sure you’d get one in your local market anyway. At Seomun, however, you have a series of gangways running above the main market area, giving you the perfect vantage point over the plethora of market eateries below. With communal dining being such an important element to Korean culture, I knew I had to capture the scene you see above as soon as I laid eyes on it. And so, climbing up onto one of the rails above the diners, my camera in one hand as I stretched out to frame the shot, I came away with the story I wanted to tell.

For me, the shot truly encapsulates the Korean dining experience. You’ve got the utilitarian approach to tableware; it’s function over fashion here. You see the side dishes: peppers, kimchi, gochujang. You see the importance mealtime plays in the social lives of older Koreans, and the disregard for it among the young as they embrace new media as their means of communication. On top of that, it’s an incredibly intimate photograph considering the number of people it features. I’ll never forget the role food plays in Korean society, and I’m pleased to have captured the story as I see it.

In terms of technical skill, the shot is a fairly uncomplicated one; I’ve long since been an advocate of simplicity and the ability to tell a story as far more important factors in the success of an image anyway. That said, I’ll try to give a few tips to those who might want to try their hand at something similar. The biggest difficulty you’re likely to have here is with the framing. Leaning out over the marketplace, it wasn’t possible to look through the viewfinder on this occasion. Those of you with fold out screens, or the ability to control your camera wirelessly from your phone will find the ordeal a much simpler one. These aren’t tools I have available, though. If you’re in a similar boat to myself, I’d recommend not shooting wide open; a narrower aperture of f/5.6 or f/8 will mean less retakes because of missed focus without sacrificing anything in the look of the image. Setting AF to fully automatic will help, too. Full-Auto AF is often frowned upon among photographers, but it’s the surest-fire way to have your camera focus on what’s nearest the lens – in this case, that was exactly what was needed.