A Break from the Boardom: Photography from the Heart 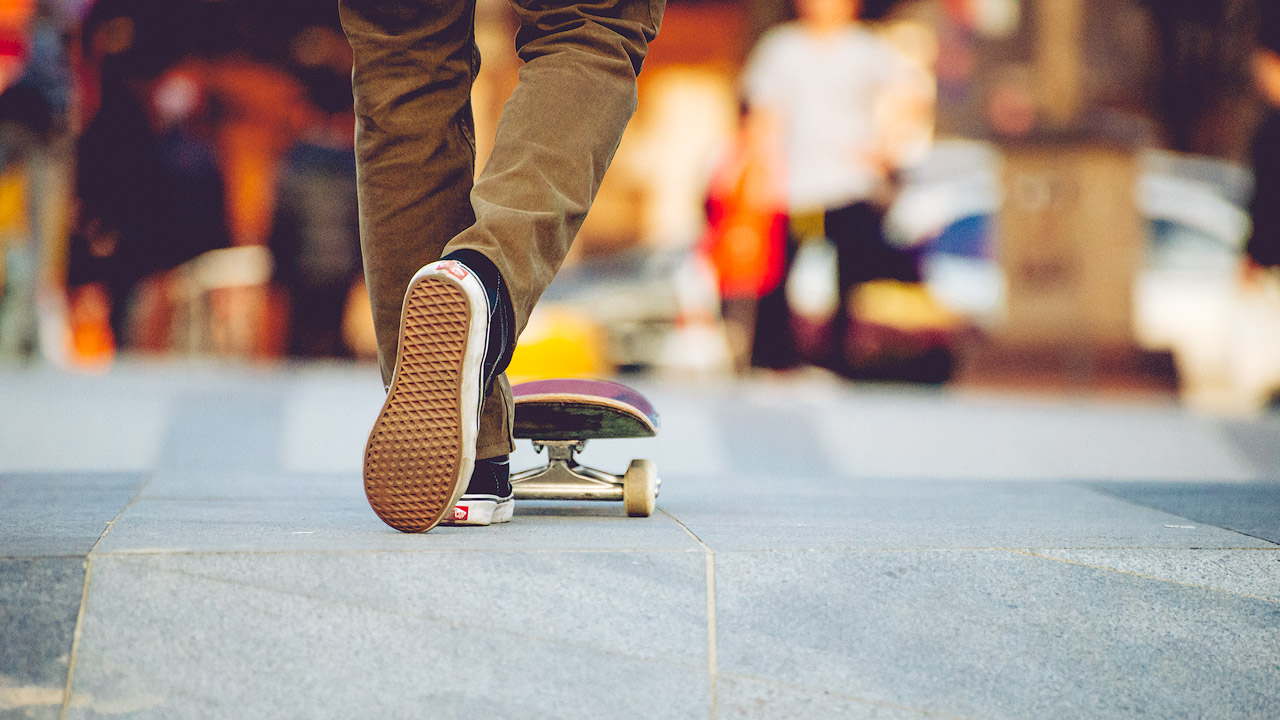 I’m paraphrasing a little here, but Spike Milligan once said that when you have no plan, nothing can go wrong. I didn’t know it at the time, but there was a lot more wisdom in those words than my young mind could appreciate. It would later become a sort of mantra of mine – one that would eventually inspire an entirely out-of-character decision. Had I given my law school peers too much notice of my “plan” to escape and become an English teacher in South Korea whilst working on my photography, they’d have petitioned to have me institutionalised. Fortunately I was on the flight to Incheon before they could even say “straitjacket.”

I’ve not looked back since; I love where I am now and the creative influences around me. And I arrived here by following my gut instinct and going in the direction life seemed intent on taking me, without over-analysing it. Had I not done so, I’d likely be sat serving a 9 to 5 sentence in a lifeless London office block. It was time to apply the same life lesson to my photography… 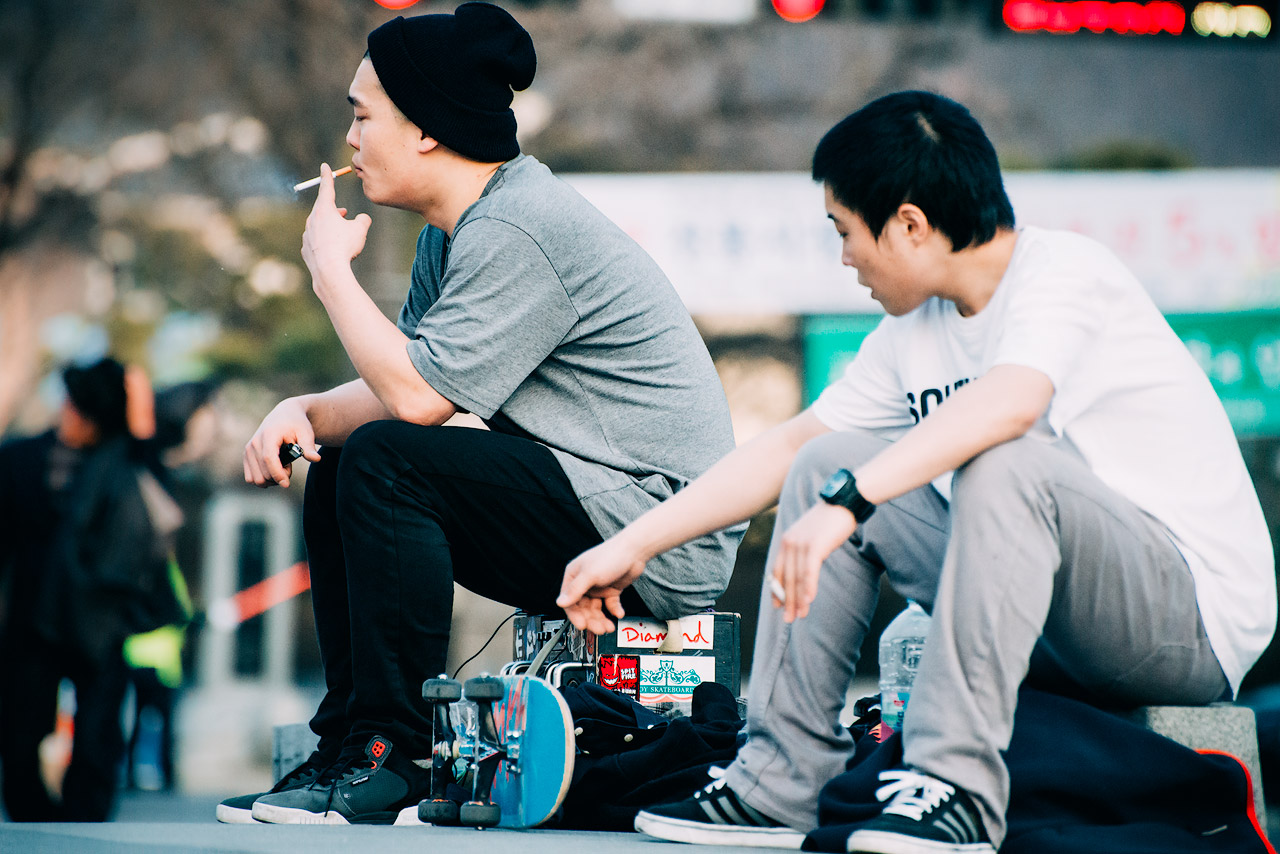 My need for control had been evident in the mistakes made in my first attempts at improving my craft as a photographer. I stumbled across a school of thought that over-emphasized the need for planning: know where you’re going and what you’ll be photographing well in advance, predict when the best light will occur, find other images of the area to work out what makes a successful image. This methodical approach, rather than improving my work, stifled my creativity. I would grow tired of a place before I’d even seen it with my own eyes. I was travelling merely to take pre-conceived photographs, the kind I thought people wanted to see, not to experience the places I visited, feel their essence and allow that to guide me. I resolved to abandon the “blueprint” approach and take a fresh route.

A recent outing convinced me that an instinctual approach was the right decision. I’d travelled to Jeonju as part of a wider unfinished project of mine, focusing on the Unseen Korea, the stuff that usually goes unseen by tourists and even a lot of long-term residents. Foresight told me I’d most likely end up photographing food, architecture and traditional craft, though I went there open to all possibilities. Mother Nature did her damnedest to give me her greyest skies, and almost everywhere was closed due to Lunar New Year. I wasn’t going to be coming away with the images I expected. Instead, I left Jeonju with some shots from an abandoned shrine in the woods, urban decay, and the images you see here which form the mini-series, ‘A Break from the Boardom.’ The title, a deliberate misspelling, is a play on words and marks a turning point in my photography. After spotting the skateboarders from a nearby market, I couldn’t help but feel myself drawn to their energy and I just ran with it. 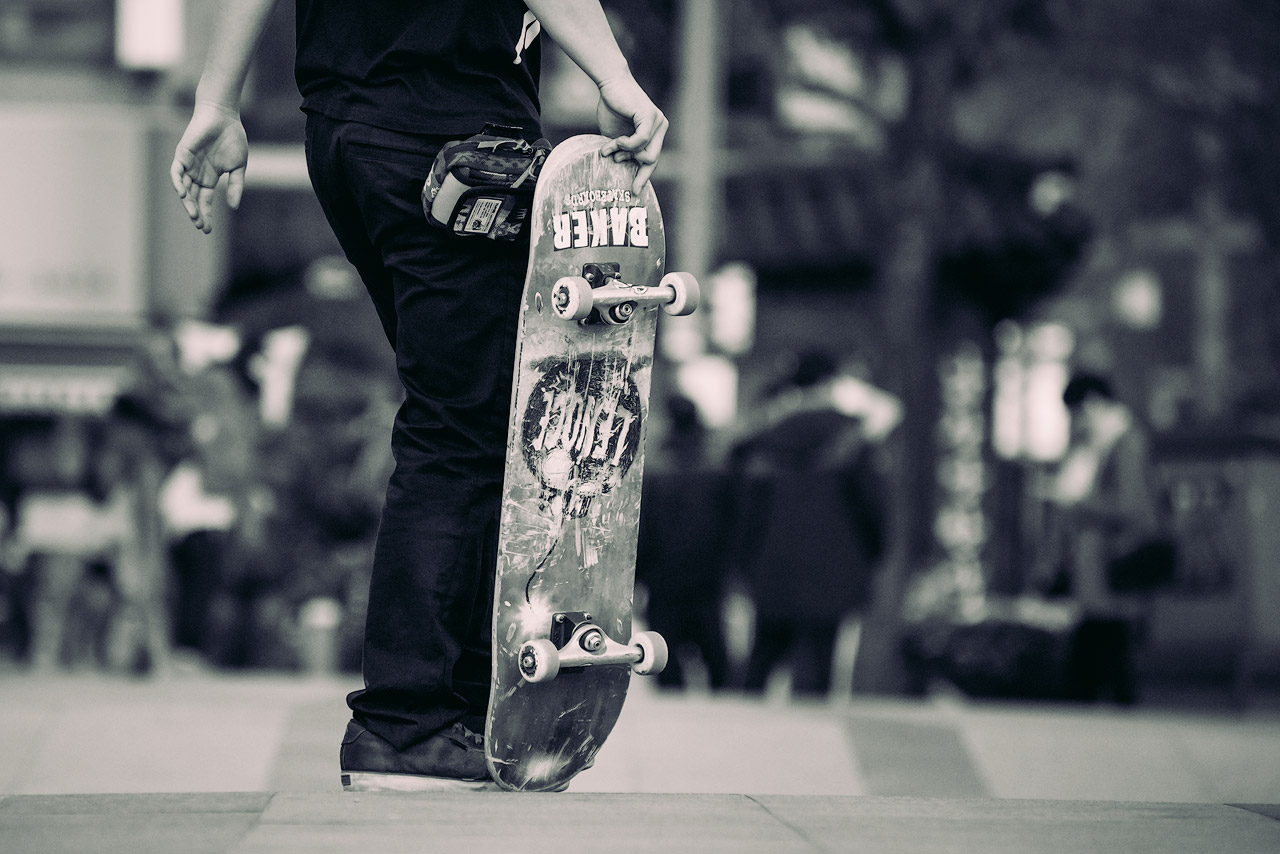 Admittedly my “roll with the punches” photographic-style doesn’t initially sound like the best tactic to come away with great images of a place, and it goes against the grain of a lot of travel photography advice, but I wasn’t photographing Jeonju… I was photographing life here in Korea. That is really what I’d set out to do in the first place, though in slightly misguided fashion. The skaters were a far more deserving subject than the stuff I figured folks back home would want to see.

I’ve found that by letting my emotions guide me, by allowing myself to be attracted to the things that interest me most, my curiosity has been reignited. It has allowed me to see Korea through fresh eyes, and feels like this was the missing piece of the puzzle all along. I realise now that truly BEING a photographer comes not necessarily from your understanding of photographic principles (sure, they’ll help); it’s really in the way you look at the world. I remember hearing somewhere that an image chooses its photographer, not the other way round. This sounded ridiculous to me at the time, but now makes a lot of sense. What a funny thing hindsight is. 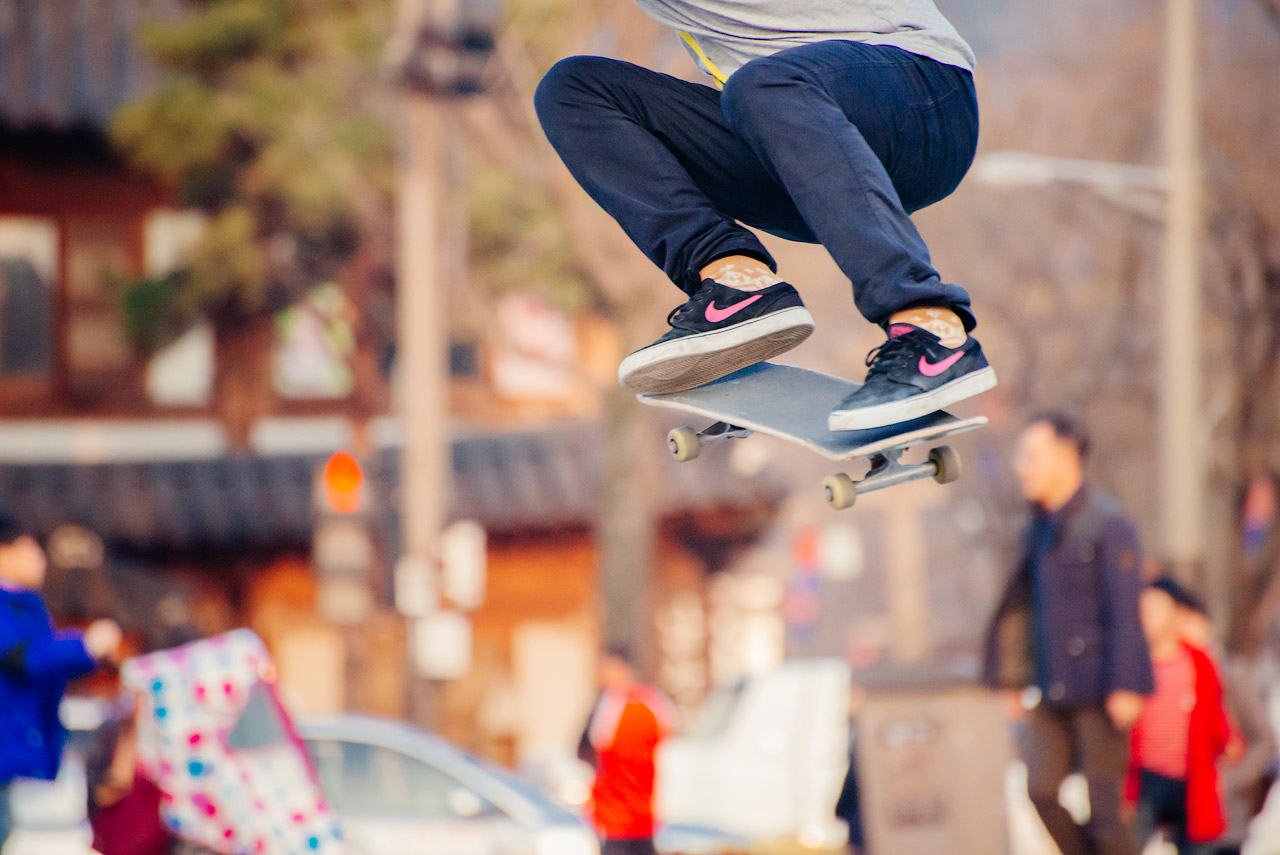 Try it for yourself: Get out there and really LIVE a place. Take a closer look, and just photograph what you’re drawn to rather than what you think other people will want to see. Worst case scenario is that your photography doesn’t improve all that much but you gain a wealth of new experiences and a new appreciation for your adoptive homeland. If you see somewhere truly incredible, by all means head back there and do it justice when the light is better, but explore more. You’ll likely find something you never banked on that pushes your boundaries as a creative. Sometimes the most interesting places are the hardest to photograph, which will get you out of your comfort zone and help you improve. Korea is the most beautifully awkward blend of tradition and modernity; you’re bound to find something that inspires you which will, in turn, lead to better photographs. 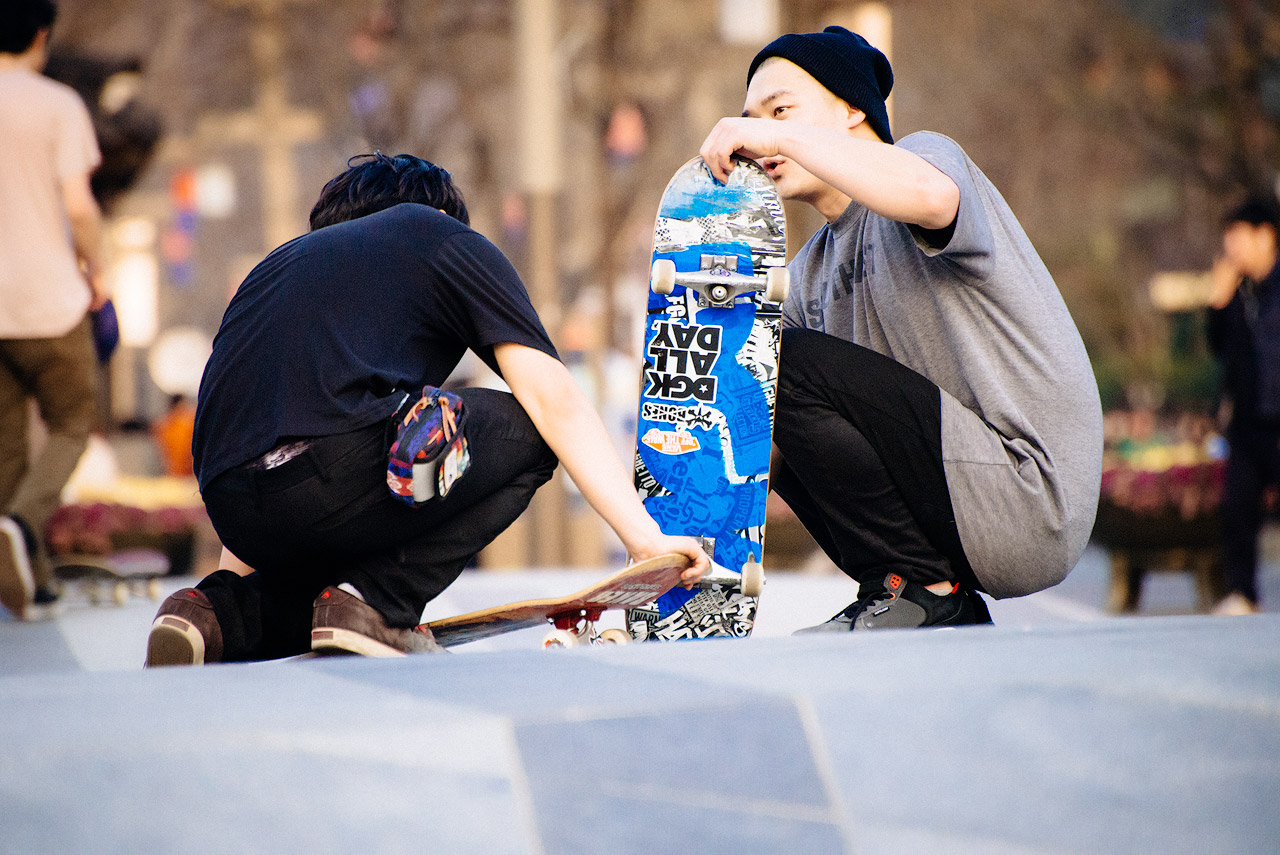 Click here for the original article as featured in PIK Magazine, Issue 8, May 2014.